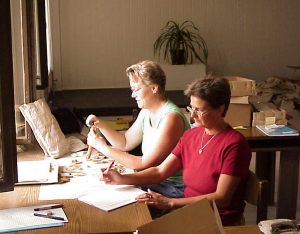 Expedition (SAX). More than 200.000 fragments of bones have been retrieved so far and about 600 kg are analysed up till now. The bone assemblages make up one of the largest from Bronze Age Hungary. The great value of this archaeozoological collection is apart from the size also amplified by the fact that the bones are generally very well preserved. Thanks to systematical screening of the cultural layers even tiny bone fragments from smaller mammals, fish or birds can be collected. 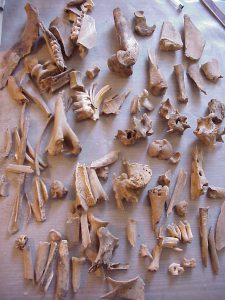 Animal bones and a smaller amount of human bones were found in different contexts in all settlement layers in a variety of different features. Most bones were found in pits with domestic debris and in filling layers outside buildings. Inside the houses there were relatively smaller amounts of bones. The majority of the bones could be considered as secondary deposits of household waste reflecting everyday life in terms of consumption, production, subsistence strategies and development on the tell settlement during the period ca 2000-1400 BC.

The majority of the bone elements derive from domesticated animals amongst which sheep/goat and cattle were the most frequent followed by pig. The domesticated species including horse and dog make up no less than 95 % of the identified elements in the assemblages. Thin cut marks on dog bones suggest that even dog meat was eaten.

Wild mammals made up a total of 3 % while the amount of fish was around 1 %. Beside that bones from birds, turtles, amphibians and humans together were represented by less than 1 % of the fragments.

Red deer is the most common wild mammal species in the material. This is the case in many Bronze Age assemblages from settlements all over Europe. The red deer was mainly exploited for antler during the Middle Bronze Age in the Great Hungarian Plain. Hare is the second most common species. Beside that roe deer, aurochs, wild boar, beaver, lynx, bear, wolf, fox, wild cat, pine marten, pole cat, ermine, hedgehog and some small mammals were identified.