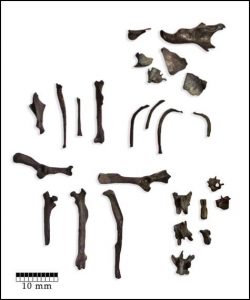 By analyzing small mammalian bone assemblages from open-air archaeological sites, information can be obtained about the composition and changes of small mammalian communities living in human settlements and habitats impacted by anthropogenic factors. These kind of studies complement what is known about the tendencies in the faunal changes in Holocene small mammals using the results of investigations on small mammal communities associated with anthropogenic habitats. In addition small mammal species composition of a site is an indicator of the habitats in the settlement’s environment, since several rodents and insectivores suggest different types of vegetation and thus different kinds of environmental conditions. Moreover, due to the presence of antropophil species (eg. house mouse, striped field mouse) more information could be obtained about the use of various settlement features (for example cereal storage facilities, rubbish pits etc.).

During archaeological excavations micromammal bones can be retrieved using flotation and/or the sieving of soil samples.

The species richness was quite high in the site of Százhalombatta-Földvár. Different kind of shrews, mice and voles were identified. This great diversity of micro-fauna may be in connection with the great variability of the surrounding habitats. Most of the small mammals indicate shrub and woodland habitats with moist soil but there were some species which indicate drier grasslands. The proportion of synanthropic rodents was high.

The most frequent species were mice: stripped field mouse (Apodemus agrarius), long-tailed field mouse (Apodemus sylvaticus), yellow-necked field mouse (Apodemus flavicollis), Eurasian harvest mouse (Micromys minutus), and the house mouse (Mus musculus). This latter find is very important from the viewpoint of Holocene faunal changes. So far this is the earliest known occurrence of this species previously recorded in Hungary. This means that this commensal rodent reached Hungary during the Bronze Age.

The spatial distribution of small mammal bones showed differences inside and outside the houses: in the samples of houses species richness were lower than outside the houses. Inside the houses there were only mice, while outside voles, insectivores and hamsters appeared as well.