Today the site of Százhalombatta is 200 m by 100 m in area. It is estimated that up to two thirds of the original area was destroyed during clay extraction by a local brick factory and by erosion from the River Danube. 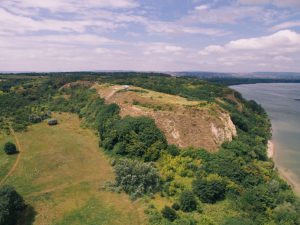 The Bronze Age settlement was built on a bluff with valleys to north and south, the River Danube to the east and it was fortified with a ditch to the west, a feature common to other Vatya tells. It was strategically positioned at the end of the Benta valley, potentially controlling access to other sites including smaller settlements within the valley. It overlooks a long stretch of the River Danube and may have been involved in river-borne trade and communication.

The settlement was first occupied at the end of the Early Bronze Age (the transition from the classic Nagyrév (Szigetszentmiklós) to the late Nagyrév (Kulcs)). It was continuously inhabited through the Middle Bronze Age Vatya and Vatya-Koszider period. This was followed by a hiatus in occupation until the Urnfield phase of the Late Bronze Age from which there are only a few traces. Occupation layers at the site are up to 6 m deep.

Finds from the site include pottery, daub, plaster, metalwork, moulds, loom weights, bone tools, antler objects, ground stone, lithics, amber, animal and occasional human bones. Many of the Bronze Age houses were burnt. This has resulted in outstanding preservation of organic material including botanical remains such as thatch from house roofs and Bronze Age food like crabapples, peas, beans and lentils. There is also worked wood and basketry. Thin section soil micromorphology, phytoliths, charcoal and coprolites add to the data from the site.

In the Iron Age a substantial rampart was constructed west of the site. Close to 400 Iron Age burial mounds have been recorded outside the rampart.