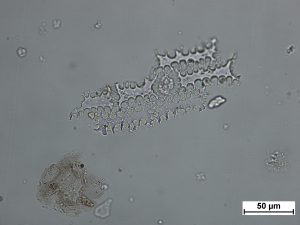 Monosilicic acid (Si(OH)4) is taken up by the roots of plant species and transported by the vascular system. Within the plant tissues, three different loci serve as silica deposits: the cell lumen, the intercellular space, and/or the cell wall. The polymerisation of monosilicic acid results in the formation of a morphological identifiable opal body or cast, which is called: plant opal or phytolith. Besides silicon (Si), other elements (Al, Fe, Ni, Mn, P, Cu, N and C) also play a significant role in the material composition of the phytolith body.

The term phytolith originates from the Greek version of phytolitaria, which means ‘plant stone‘. The terminus technicus was created by the German scholar Christian Gottfried Ehrenberg, who pioneered in the discovery of the microscopic world, including phytoliths from aeolian dust and soils. 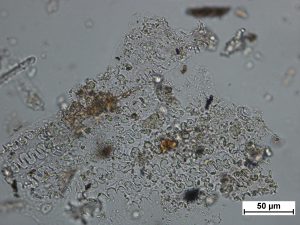 Due to the fact that plant opal particles are extremely resistant to weathering agents in their geological media, they provide a useful tool for archaeobotanical and paleoecological studies. At Százhalombatta-Földvár phytolith analysis is applied in order to collect information about plant-human interactions of the societies inhabiting the tell. From the methodological point of view two different approaches are applied at this particular site. Bulk samples are collected in each year during the excavation period. These are processed and analysed in the ‘classical way’, which means that phytoliths are recovered from the anthropogenic sediments or phytolith reach layers by a multi-step laboratory process. After the laboratory procedure the phytoliths extract, which represent an ex situ archaeobotanical assemblage, is embedded in glycerine. In addition to this, thin sections are also scanned to test them for the presence of phytoliths and silicified tissue remains. This latter approach opens the possibility to analyse plant use and disposal in its in situ form, however the morphological description and identification is hindered by the fixed, 2D analytical environment. At Százhalombatta-Földvár we find that the two above mentioned approaches complement each other and increase the interpretation potential of the analysed archaeological phenomenon or question. 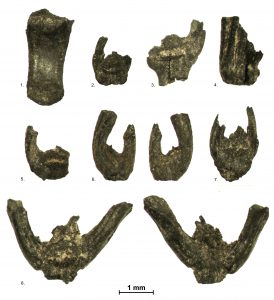 The archaeobotanical study of Százhalombatta-Földvár is done in an integrated way by applying multi-proxy approaches. This usually implies macro-archaebotanical methods, such as carpology and anrthracology, as well as micro-archaeobotanical approaches, such as phytolith analysis.

Due to the fact that cereals brought into the settlement area leave well-defined patterns behind, they represent one of the most easily identifiable plant groups. Cereal cleaning by-products, grouped under the term chaff, produce diagnostic phytolith morphotypes (elongate dendritic). The identification of chaff remains, which include the glumes, paleas and lemmas of the cereal is accomplished based on the in situ observation of silicified plant tissues in thin sections or on articulated/disarticulated remains recovered from bulk anthropogenic sediments.